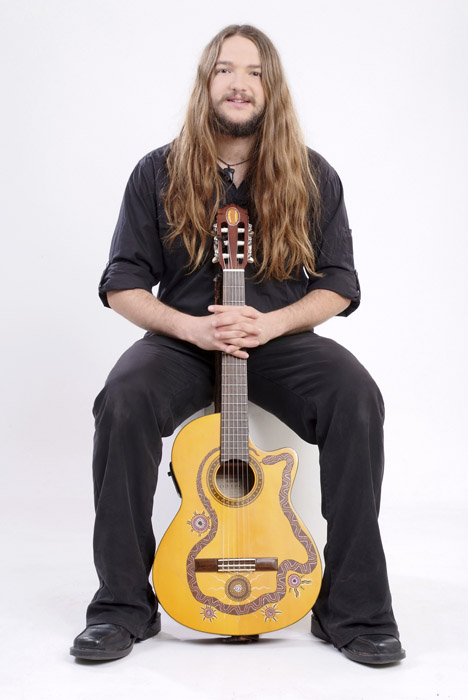 My wife picked Nano out of the 61 gigs at the 2009 Mullumbimby Music Festival. We were going through the program judging performers by their portraits. I glanced at his free flowing “Joanne D’Arc” hairdo and flicked the page while she noticed his grin and picked him as the most openhearted artist on the program. She was right.

Watching Nano perform was a revelation: he is a gifted musician blessed with unstoppable, contagious energy. His ballads have the romantic quality of lullabies and his crescendos lift the soul and command movement. To my mind, Nano’s music combines the poetic genius of Ivano Fossati with Jovanotti’s vitality. If you are not Italian and don’t know what I am talking about, you’ll have to trust me at face value. Alternatively, get your hands on Fossati’s live double album “Buontempo” and Jovanotti’s “Lorenzo 1994”. It will be like dressing your stereo in vintage Armani…

What was truly special about Nano’s performance was his storytelling: the anecdotes he used to introduce his songs were told with humour and disarming honesty. His tales touched the public with the force of their reality. In concert, he talked about staying at a Belgrade squat where the bathroom doubled up as a pigpen and having the surreal experience of sitting on the toilet looking Pepsa, the pet pig, in the eyes. He also shared intimate memories of his late father accepting his choice of becoming a professional musician. “Lucky boy!” I thought with more than a hint of envy. Explaining my life choices to my dad had been a painstakingly slow losing battle against an army of fears. He sometimes accepted my decisions with a loving leap of fate but understanding them was out of question. To the day of his death, he dismissed my wanting more than a safe job in the village I was born as a foolish bout of optimism. Bonehead.

Nano’s style intrigued me so I wrote him a fan email with a request for an interview, which he granted. We agreed to meet at the sound-check before his last concert in town and have a beer and a chat between the technical stuff and the show. He had just returned from the Woodford Folk Festival, where he performed for six days straight and forgot to sleep. He was freshly showered, which gave him a new lease of life but seemed exhausted and a bit concerned about the state of his voice. I watched Nano pacing the stage getting the gear ready and thought that he moved like someone who inhabits his head more than his body. I wondered whether he kept his head bent forward because he liked the feel of his hair slapping his cheeks at every step or whether he was worried to trip over a loose cable and looked down for safety reasons? I wondered whether he had expected that I would be younger?

Once seated at the Courthouse Hotel in front of a couple of schooners of Coopers, I asked when he decided to become a professional musician. “Ever since I was a kid, I don’t remember ever wanting to be anything else – he said simply – apart from being a soccer player, of course”. He remembers the moment when his love affair with music began precisely: his elder brother did not want to go, so his mum took Nano – age three – to an orchestra performance. The experience touched him so deeply that from then on, his heart was set on becoming a musician. He started taking lessons and was playing the violin at three. “It was a violin-shaped piece of cardboard, at first”, he qualifies. He raved about the Suzuki method used at his school and likened it to the Steiner teaching philosophy because the learning process is fostered without using an authoritarian approach. He thinks that children, who learn with Suzuki’s method develop a unique relationship with music that stays with them for life. He said that he can spot people that learned music the way he did. I wondered whether my two-year old son might be musically gifted? Our jam sessions of Hey Diddle Diddle are not promising…

Nano landed his first professional gig at fourteen, playing base guitar for Chilean rock group Matorral; at nineteen, he started his solo career and he has been on the road ever since. Touring keeps Nano away from home for ten months a year (home still is Santiago del Chile). He sings in Spanish but the entries on his travel journal are in a collection of different idioms. He laughs when I tell him that he speaks Italian with a thick Roman accent, and blames a past girlfriend for it. He remembers meeting Brian Dubb – his manager – on the plateau of Cuzco, Peru, where they found each other playing guitar on the same terrace; the breathtaking views having inspired them both. The friendship started at high altitude was rekindled in 2007, when Brian invited Nano to Australia for a tour that promised little money but a healthy dose of fun. His performance at Woodford (QLD) Folk Festival earned him an invitation to Port Fairy (VIC) Festival and since then he has found himself on the dry continent often.

Nano’s new song – composed on a week’s break at the hippy hamlet of Crystal Waters – has no words and not even a title yet, which led our conversation towards the creative process: for Nano music comes before lyrics. He considers himself “A connected musician more than a connected lyricist”. I asked what he meant with “connected” and he described the musician as a conduit more than a creator: “You don’t create music – he said – you compose it; you put things together, find them, more than creating them”. Sometimes his experience is blessed with great clarity: “Once or twice, I have picked up the guitar and written a whole new song in one go”. After a short pause he adds with amazement: “Something that was not there before”; at other times, he may toil with an idea that intrigues him for a whole year; “ant’s work”, he calls it.

On stage, his main concern is to connect with the public. His aim is to be  “fully present, honest, real and personal”. Nano prepares by entering a calm, almost meditative, state; he is prone to hyperventilating and knows the adrenaline rushes will come; calm is what he seeks before the show.  He strives to become physically and mentally supple, to connect with himself and become a good medium. “People can sense whether or not you are enjoying being there –he added – enjoying it in the broadest of senses: you could be happy or sad; what matters is being content and accepting of what is happening to you”.

“I perform to create something beautiful, otherwise I may as well stay at home”, he added with a smile.  I could not agree more with the objective of creating beauty but the introvert in me finds it hard to relate to his open – almost unguarded – stage style so I asked whether he has reservations about sharing intimate stories with his public and he said that it would be tempting to tell those stories over and over again just to explain what he is trying to do with his music but that he shares openly only when he feels a real connection with the public. “If the connection is there, expressing your feelings is valid and can be very relieving. It is a bit like talking about your feelings within a relationship: it makes you feel much better than hiding from them”.

Listening to Nano talk about music reminds me of my Buddhist teacher: she is an elderly Welsh Lama with a librarian’s smile and a gift for subtlety and she talks about the pursuit of happiness using an uncannily similar vocabulary to Nano’s, which prompted a question about religion. Nano seemed startled by the conversation’s non sequitur. To my surprise because he sounds so Buddhist, he does not think of himself as Buddhist. He described himself as Jewish with a sense of belonging to a tribe more than a religion; he sounded firmly secular and a bit weary of the subject and said he feels “spiritual but not religious”.

I took a picture of him and then left to give him time for a bite before the show and while I waited for that to start, I played his latest album: “Los Espejos”, which is confident and inspired and has not left my car stereo all Summer. As I often do, I played all of its eleven tracks and listened to the last song – “Opticas Ilusiones” – twice, as a treat. 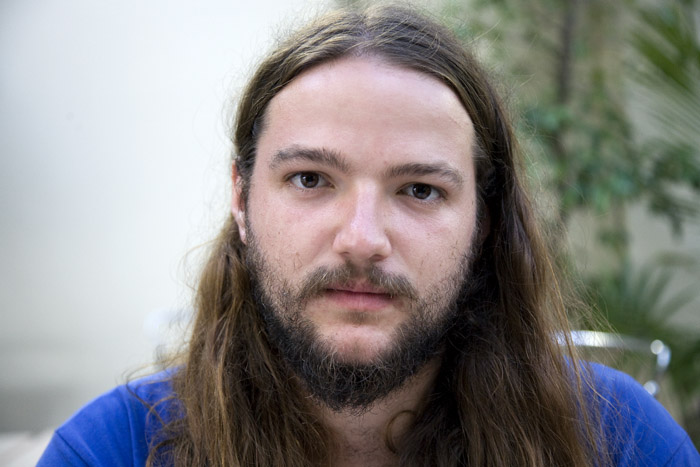