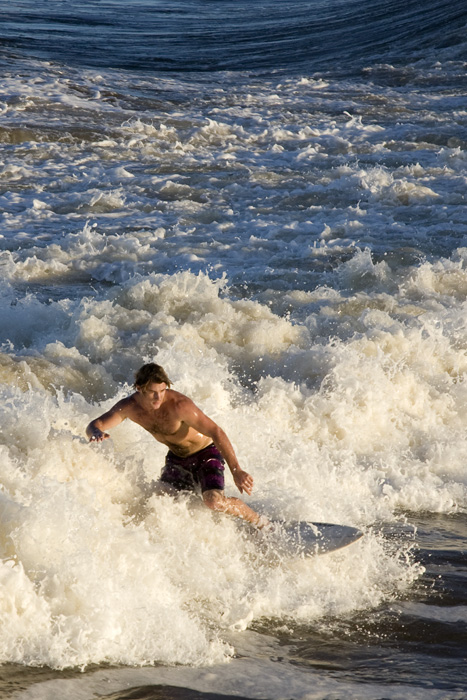 On this Friday afternoon, the air smells of salty hot chips. Several families are having picnics by the river and the occasional kid in zinc war-paint and boogie board whizzes past you on a squat acrobatic bicycle, on his way to the last surf before dusk. The colony of cockatoos that inhabits town is noisily getting ready to roost on their fig tree and when the band at the Brunswick Hotel fills the air with its tunes, you know that the weekend has started in earnest. 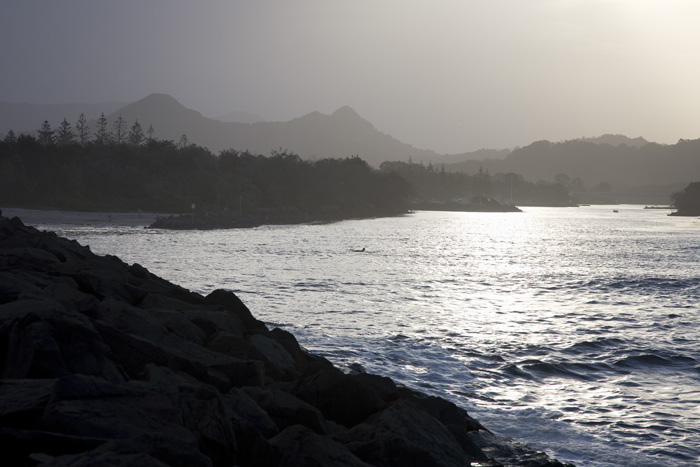 I moved to the Brunswick valley a year and a half ago from Sydney (and Modena, Italy – where I was born via London, where I worked and fell in love). My wife Lisa and I wanted to live close to friends and family while raising our baby so I resigned from my banking job, we packed our house and moved North. Such a CV makes me a “tree-changer”, of which there are many in the Northern Rivers region of NSW. At the ‘meet the neighbours’ tea party we dutifully organised, one of them mentioned that the people across the road were also a couple of bankers: “Lovely…until they went heavily into drugs”. A remark I found half funny, half ominous.

Having a child to entertain, I find myself driving into Brunswick Heads every day. The town is charming, calm, situated in a spot of extraordinary natural beauty and has a lot to offer to a dad-and-son team in the market for some fun. 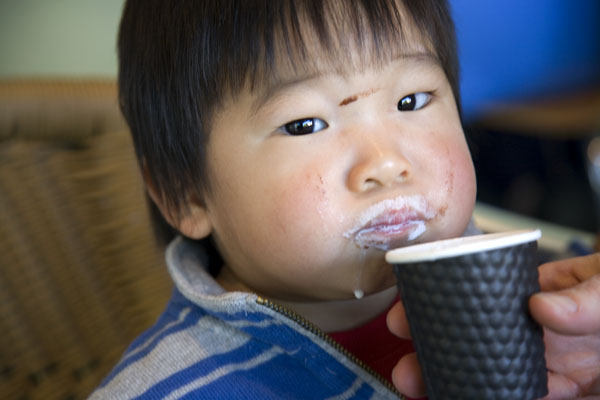 If (like me) you are neither a surfer nor a fisherman, the thing to do in Brunswick Heads is to have coffee. The large block that makes up the centre of town is graced by six coffee shops; not counting the gelato parlours and the health food shop, which can also brew you a cup. Despite being Italian, my caffeine addiction is not strong enough to take care of all six of them so I patronize the four that face the river reserve. The Riverside Espresso Bar (T) is spacious, sells a few local goodies and its staff is consistently kind despite the mess they know my son makes while having lunch. This is my favourite spot in town and I hang out here most days. Cino Bambino (T) is a small outfit run by a charming Melbourne couple with a chubby adorable toddler son called Charlie. Their kid friendliness – as the name might suggest – is unflinching; so much so that they managed to squeeze a playpen onto their premises. They sell a small but well-chosen selection of funky child paraphernalia and they give you a tiny teddy biscuit with your coffee, which is a fun plus for everyone, even if they don’t have children. The Happy Dolphin Café (T) is more aloof. I go there occasionally for take-away flat whites on my way to the playground. One of their waiters has his arms covered in the most extraordinary tattoos. I once asked whether he had designed them himself and what they represented and he said that they were a reminder of “stuff” that had happened to him. The exchange was awkward so I paid him sincere compliments on the amazing colours and enquired no more. He must have appreciated my comments because he now greets me as “matey”, when I approach the counter. The new kid on the block is Sandbar (T); proprietor Katie Bassett is local café royalty: her family ran the Pass Café in Byron Bay for years and her brother Paul was crowned 2003 world’s barista champion! Sandbar offers a warm and sunny welcome and is a lovely place where to fritter away an afternoon.

Across the street from the cafes, the town’s playground follows the river’s bend. The reserve has a magnificent row of Norfolk pines that shade the swings from the morning sun, making it a pleasant spot to entertain small children even on a hot summer day. Another good kids’ hangout in town is Torakina Beach, which is a small, sandy inlet just inside the river’s estuary. If you go there at high tide, you can swim in crystal clear ocean water without having to worry about the surf.

If you are travelling with older children (or fancy a paddle yourself), you can organize a guided kayak tour of the Brunswick River with Michael Hogg (T). I took my Italian relatives downstream from Mullumbimy to Brunswick Heads and we all had a great time, including my 71-year old mum, who was at first a bit sceptical about the whole enterprise… Alternatively, you can hire a canoe from the town’s pirate (T), whose red galleon is anchored near the road bridge. I often see him sailing in in the morning on a tin dingy with his Staffordshire terrier standing proudly at the bow of the vessel and sometimes wonder whether he sleeps on a mother ship anchored somewhere in deep ocean waters. If you hire a canoe and arrange your own paddle, make sure to avoid low tide or you’ll risk having to get out often to push your boat off the many sandbars. You guessed right: I speak from experience.

The best spot to grab a bite in Brunswick Heads is Yami’s (T), which sells excellent falafel plates and has tables on a pleasant shaded terrace. Fish and chips are another option. The town boasts two fish and chips outlets (the Starfish and the Fish Bar); take your pick, they are both good (but not as good as Mongers (T) in Byron Bay). If you are looking for fine dining, you’ll have to drive out of town, though. The best restaurant in the area is La Table (T), where French chef Bruno Pouget cooks traditional French fare using local ingredients with outstanding results. Go there on a Thursday night for the best bouillabaisse below the equator and make sure you book in advance. If Lisa and I score a babysitter on a Sunday evening, when La Table is shut, we go to Olivo (T) in Byron Bay, which offers modern Australian food with more than a hint of Italian-style cuisine. Last time I went I ordered twice baked gruyere soufflé, oxtail potato gnocchi and hazelnut meringue with caramelized quince…yum! 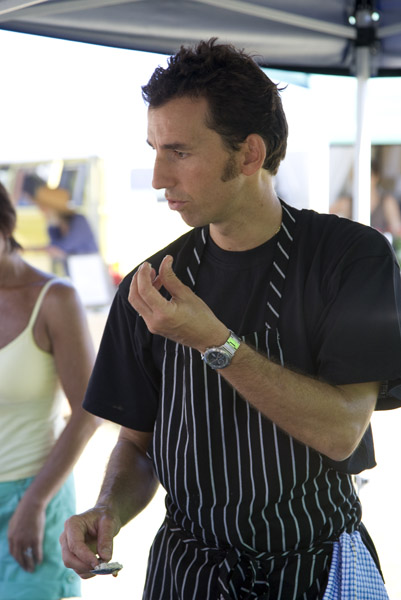 The health food shops in both Brunswick and Mullumbimby sell nourishing –if a touch bland – vegetarian fare. For delicious lunches, go to Café Lulu’s (T) in Mullumbimby, where chef Linda knows how to cook mouth-watering vegetarian meals. My regular order is either a tofu burger or a warm quinoa salad and if I get there after twelve, I religiously check the specials’ board for a treat. Lulu’s is also an excellent spot for people-watching so take your time and stay for coffee and cake too. If you happen to be in Mullumbimby in the morning and need a sugar fix, go to La Table café (next door to La Table restaurant) and order coffee and a Danish. Paul, the pastry chef, bakes them on premise daily and they are the best I have had since September 2003, when I checked out of the Metropole Hotel; La Grand Dame of the Hanoi hotels, which still bakes pastries that are as good as French.

The best wood fired pizza I have tasted in Australia is at Milk and Honey (T) in Mullumbimby. Our regular Friday night order is a medium margerita with olives and anchovies and a large mushroom. If you can pace yourself with pizza, leave space for dessert and order chocolate mousse; you won’t regret it. If you are missing a Thai meal, Billi’s Thai (T) in Billinudgel is just a five minutes’ drive out of town. They do a good pad thai and tasty stir-fries but I find their curries a bit watery. The best curries in the area are at Spice It Up (T) at Mullumbimby golf club, which is a fifteen minute drive from Brunswick.

There is a lot more you can do in the Brunswick Valley if you have extra time. Drive through the national parks and historic villages that pepper the area, visit the Murwillumbah Art Gallery for the art and for the view or go to Crystal Castle: a new age theme park with the widest choice of fancy rocks you can imagine, or get swimming lessons for your kids from surfing legend Gary “Kong” Elkerton. I received a voucher for a hot air balloon flight on my last birthday – I might do that next and then write about it. Stay tuned!

The Brunswick river was first spotted by Western eyes in 1828, when Captain Rous named it in honour of Caroline of Brunswick, King George IV’s dead German Queen. By 1840, tree cutters had started arriving in the area stripping The Big Scrub (a forest that covered the whole of the Northern Rivers region) of its red cedars. From Brunswick Heads, one can still drive into Mullumbimby following what was the first track inland built by the tree cutters (now Saddle Road and McAuley St). The road is narrow and in parts unsealed but offers wonderful views of the valleys below.

There has been a general store in Brunswick Heads since 1880 and a pub – the 14-room Ocean View Hotel – since 1884. By the end of the nineteenth century, Matthew Devine operated a punt across the river in the spot where the Pacific Highway now crosses on a bridge that carries Matthew’s name. If you drive into town using the Brunswick Valley Way, you’ll cross the river on the Durrumbul bridge, named after the aboriginal word for the native water rat inhabiting the valley. A squat hill by the river’s estuary has an outline similar to the rat’s and the landmark gave the aboriginal name to the area.

The river became the docking point for ships carrying supplies to the new settlements in the area but the estuary was so treacherous that, between 1866 and 1898, the “Brothers”, “Francis George”, “Star of the Seas”, “Eva Maud”, “Titanic”, “Nambucca”, “Brilliant”, “Brunswick”, “Dolphin”, “Lizzie Frost”, “Agnes”, “Annie C. Lynn”, “Endeavour” and “Cairo”, all shipwrecked in their attempt to sail through the heads. Brunswick Heads’ loggers lobbied the local government for a breakwater at the river’s mouth but lost to another infrastructure project: the Byron Bay jetty, which since 1895 provided a safe docking facility to the ships serving the cedar route. You can still see a few stumps emerging from the waters to the left of Main Beach in Byron. That is all 1974’s Cyclone Pam left of the jetty and of the twenty-two fishing boats that the townsmen had lifted “to safety” over it. Only Leicester Phillip’s boat, which was too big to be dragged over the pier, survived Pam’s wrath by sailing into the Brunswick river before the storm hit.

In 1894, a rail line opened between Lismore and Murwillumbah, “from nowhere to nowhere”, the critics called it – and Brunswick Heads found itself cut off when a couple of land speculators successfully twisted the line away from the coast and through the newly established village of Mullumbimby. The lack of transport infrastructure hindered the town’s economy but a coach service from Mullumbimby allowed Brunswick Heads to develop into a tourist destination. In 1937, the footbridge over the river was built to facilitate access to the beach and in the sixties, a road bridge was built originally to transport materials for the construction of the breakwater.

By the end of the 1960s, dairy and banana farming, which had been the main economic activities in the Brunswick Valley, became unprofitable and when in 1971 Hippy pioneer Colin Scattergood approached Frank Mills – who was knee deep into mud fixing fences – to buy some land, he was able to purchase 400 acres in Main Arm for $16,000. The Flower Power movement had found a home in the Northern Rivers. Nimbin’s 1973 Aquarius Festival marked the official beginning of the Hippy migration into the area, forever changing its social makeup.

Festivals in the Area (my selection) 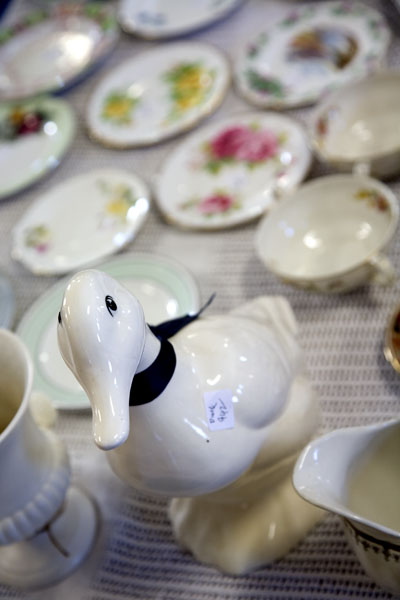