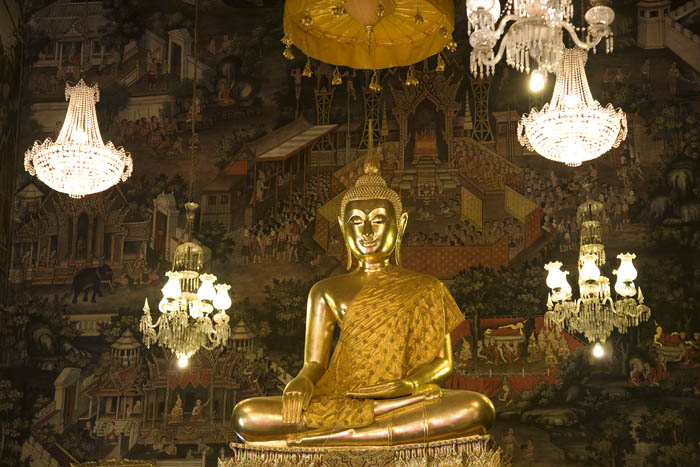 Nonna Iole and I escaped the dust storm that swept the East Coast of Australia and wreaked havoc on all sorts of transport just two days before our departure and arrived in Bangkok with no delay and no hassle. I accompanied my Italian mum half way home to help her change planes and I carved out a two-day mini holiday as a treat. We arrived late at night; I accompanied mum to her gate, entrusted her to a couple of fellow travellers from the northern Italian town of Cuneo (honeymooners, I guess) and I headed out.

I am staying at the mid-market Luxx Hotel (T), in the salubrious (western end) of Silom Road. I have lots to see and only two days to spare so I set my alarm clock for 5.40am and go to bed. In the morning, I scoff down an OK breakfast and I am out. The city smells of chicken gutted and cooked in the streets. Stripped of an aircon shield, I am dripping sweat within minutes. I crave another coffee and I wish that the thunderstorm the air is pregnant with, would come.

When I reach the ferry terminal, everything is murky: the sky, the river and the posh hotels dotting its banks. For a while, I lose myself watching the huge weed-rafts floating downstream, then the high-pitched whistle of the mooring attendant announces my ferry and I hop on. I tell my destination to an efficient staffer, who shakes her Hello Kitty metal change purse to announce herself to travellers and sell them tickets and a few minutes later she taps me on the shoulder to make sure I alight at the right pier.

My first stop is Pak Khlong Talat (T), the city’s twenty-four-hour flower and vegetable market. My appearance and my camera attract the locals’ attention. The only other “farang” on the scene is an American woman carrying a baby, which explains why she was up at six. I take pictures of garlic, chrysanthemums and rose bunches carefully wrapped in old newspapers, and of a lovely lime seller, who approached me with the pretext of showing off his fruit, while he is obviously hoping for a photo. I wish I could speak enough Thai to make conversation or to compliment him on his produce, at least. I don’t speak any so a smile is all I have to offer. I stop to watch women making flower garlands, cabbage being delivered, onions sold and stall holders having breakfast; some having a nap. In the drab light, the orange monks going for their alms run stand out as if neon lit. It is a moving feast in the making and a great spectacle.

Bangkok has a bad reputation for traffic so on this trip, I stick to the river and its ferries, which prove efficient, cool and rather pleasant. Travelling on water, I reach the entrance of Wat Pra Kaeo (T) in no time. The whole complex is covered in gold and mirror mosaics, which I find visually overwhelming. I love the kitsch aesthetic of Thai temples; this is what I am here for but this Wat is more than I had expected and more than I can take in. I catch my breath admiring the Ramayana murals in the relative coolness of the courtyard arcades before entering the temple of the Emerald Buddha. I kneel in front of the holiest statue in the whole of Thailand and stay for a while. I even make an attempt at meditating, which fails. I am too distracted by the room’s gaudy décor: the golden altar, the murals all around and the red and golden roof above me are all too stimulating. My eyes can’t rest and my mind can’t either. A humbling feature of my meditation practice is that whenever I endeavour to clear my mind of any thought, the most puerile ideas come to the surface. Six years ago, I spent the most part of a ten-day silent retreat making mental souvenir shopping lists. On this occasion, my synapsis all line up to form the view that, despite its grandeur, Wat Pra Kaeo is quite modest, compared to the Vatican. I entertain the thought just long enough to feel embarrassed by its banality and leave.

Once I realize that I am hot, tired and no longer enjoying being in the Grand Palace’s precinct I head out and look for the Krisa Coffee Shop (T), which is tiny, dark and – as promised by the guidebooks – air-conditioned. I order green chicken curry, spill the first coke all over myself in a fit of fuss and fluster, order a second one and finally relax and enjoy my meal, which is perfectly executed and delicious. Coffee is instant, thick and disgusting. I curse myself for not having ordered tea. On my arrival, I had noticed a red Illy sign on the door and believed I could find espresso here. Foolish.

In the streets, the army presence is visible. Some of the young soldiers show off their bodies wearing their uniform skin-tight and manage to look camp and fierce at once. I stare at them in disbelief. A country that dresses its soldiers in lycra mustn’t be overly concerned about parading its men’s virility, which is refreshingly mature and yet another example of the mixture of hard and soft features that Thai men are able to display. I have observed stern taxi drivers going out of their way to understand me and safely deliver me to the right address, their solicitousness unexpected and gratefully appreciated. Strength and kindness projected at once in a display that western men should take notice of and consider imitating.

I spend the afternoon at the nearby Wat Pho, home of the biggest reclining Buddha in the country, who looks content and comfortable in his horizontal pose. I bask in his golden gaze and admire the mother of pearl tattoos on the soles of his feet and then head back to the courtyard and chat to some Thai students keen to educate me on the environmental pitfalls of riding elephants as a tourist activity. They are polite and determined and even though their English is not up to the task, they bravely approach tourists and forward their cause. Before parting, we take pictures of each other. Thais rarely smile for the camera so these kids’ turn out looking like some rather serious insects. After my encounter with the young activists, I make my way back to the air-conditioned cocoon of my hotel room and get ready for the evening.

For my cocktail at Sirocco’s Sky Bar (T), I had packed a silk Nicole Farhi shirt from my yuppie London years. It is sexy without being revealing, which fits my lazy gym habits perfectly. On the 64th floor of the Dome Tower, a flock of carefully groomed waitresses in modern ao dais fussily welcome each lift-load of customers and sift them between “drink or eating”. I am here to drink and I am chaperoned to the terrace. The view is stunning. Being there feels like floating over the city. A lit staircase leads downstairs to the pointy balcony where a round bar delivers cocktails to a crowd of western and Japanese patrons. I order their signature Sky cocktail (vodka, gin, guava juice and raspberry puree) and enjoy the breeze, the view and the atmosphere, which is both romantic and fun. Sipping chilled alcohol amongst this eclectic crowd in high spirits ends my busy and enjoyable day on just the right note.

The following morning, I am back to temple duty: I head for Wat Arun, the Temple of Dawn, which is another explosion of religious beauty and offers lovely views of the river from its Chedi, decorated with broken plates once used as ballast in Chinese trading ships.  I sit in the fan-powered breeze of one of the temples amongst a group of Thai women and monks listening to the Abbott delivering a lecture. The piousness of the gathering is watered down by the preparations for the communal lunch and the alms being delivered spark a light of expectation in the eyes of the young monks on the temple’s platform. Their excitement is understandable: Thai monks are not allowed any solid food after midday so this supper, which will have to keep their bellies happy until tomorrow’s dawn, is keenly anticipated.

The midday heat soon gets the better of me so I retreat to the poshest place I can think of: the Oriental Hotel. I lunch on their veranda watching the boats floating by from behind the floor-to-ceiling glass windows of the restaurant. Lunch is green papaya salad, duck red curry, sticky rice with mango and a cappuccino. The Thai food is delicious and “not too hot”, as the staff repeatedly checks in a show of conceited concern. The coffee comes with a couple of ritzy biscuits and a cinnamon quill encrusted with sugar crystals. I don’t sweeten my coffee but the novelty stick is so beautiful and aromatic that I am more than once tempted to dip it in.

After my meal, I feel perfectly restored by luxury and ready for the Royal Barge Museum, which, unless you charter a long tail boat or join a canal tour, is a bit of a trek to get to and, frankly, not worth the effort. The golden barges must be a stupendous sight floating down the silty river carrying dignitaries in full regalia but suspended on their frame in this large metal shed, they look a bit pointless: eight sad gondolas in drag trapped outside their element.

I soon retrace the long narrow path to the ferry pier and float back to Silom where ninety minutes of Thai massage bliss end my visit to the “city of angels”. When I exit the treatment room, a storm will drench me to the bone and a Boeing 777 will deliver me home but for now the nerve endings along my body’s energy lines are busy receiving shots of “good pain” from an expert and nameless masseuse. Before the rub, I volunteered my name and said I was pleased to meet her and she joined her hands in the prayer position and bowed. I waied back. This foreigner in white pyjamas attempting a Thai wai from his supine position must have looked funny because she giggled, and then started the massage.