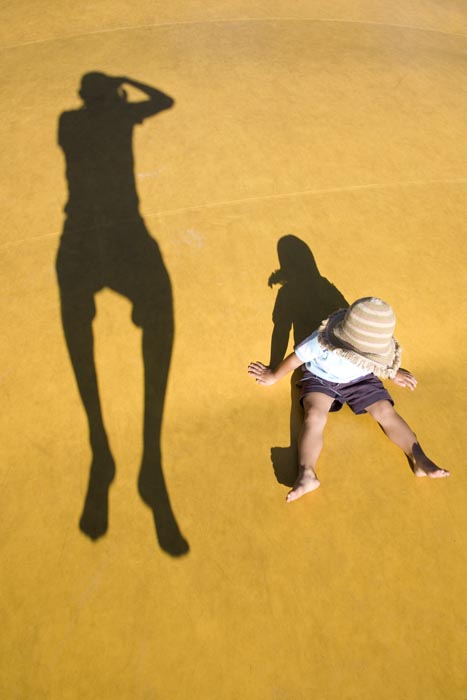 Fu and I on the Jumping Pillow

After the first hour’s drive south, the manicured macadamia orchards perched on Bangalow’s posh hills with ocean views gave way to the sugarcane plantations that inhabit the floodplain. The cane fields are interspersed with farmhouses: beautiful old weatherboard Queenslanders and Federation houses mixed with the occasional brick number from the sixties. A legacy of my fellow countrymen – I guess – emigrated here one or more generations ago. We were driving away from Byron Bay’s sub-tropical paradise heading towards Norah Head, just south of Newcastle on the Central Coast of New South Wales. 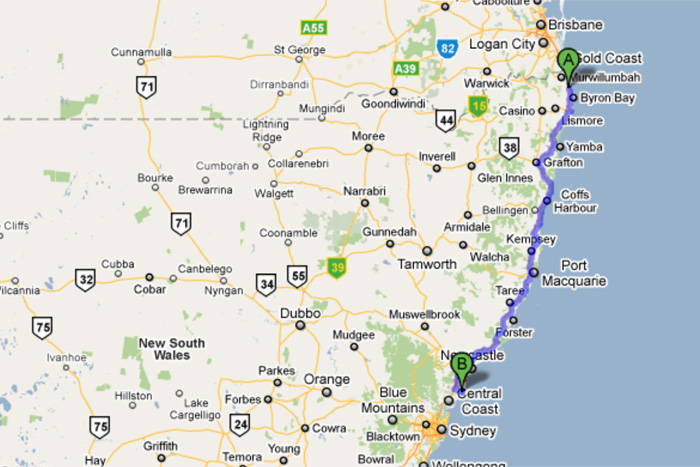 The roadwork around Ballina slowed us down but kept our 3-year-old mesmerised for a good hour. What is it with boys and big machines? The grandly named 1,000 kilometres long Pacific Highway, which connects Sydney to Brisbane and which is – for a substantial part – still just a glorified country road dissecting towns and villages is bit by bit being rebuilt. The traffic from the largest city in the country to its fastest growing area: the shapeless urban sprawl that goes under the generic name of Gold Coast, in South East Queensland, demands a better road and the state – in fits and turns and in a piecemeal fashion – is slowly providing it.

We stopped for lunch in Grafton, which brought memories of a previous trip: the last time we were in town we arrived ravenous on a Sunday afternoon. The town was sun-bleached and shut and we ended up lunching on the only thing we could find: diet coke and warm cardboard, advertised as toasted sandwiches. This time, we head to South Grafton on a whim and stumble upon the cool oasis of the Australian Hotel, which has a great bistro: the staff are friendly, the room air-conditioned, the other patrons mainly locals. We ordered fillet mignon, which came wrapped in bacon, accompanied by salad and chips and cooked to perfection. Delicious.

After lunch, we got back on the road for more: “spot the big digger” games, kids’ music (thank the Lord for the Curly Cousins!) and plain, boring driving. Only the bridges provided welcome distractions: to reach our destination we had to cross the many watercourses of the Northern Rivers region of New South Wales: the Richmond, the Clarence, the Bellinger, the Nambucca, the Macleay and the Hastings river. All majestically twisting themselves to sea.

Many of the cars we passed had stickers on them. In this part of the world, it has become fashionable to put a customized sticker representing one’s family on the back of one’s car. Shops sell individual stylised figurines of men with surfboards, women ironing, kids of different ages and various types of pets. Customers arrange the figures in a line (man, woman, kids, pets is the standard procession), stick them on the back of their cars and hey pronto: they have told the world who they are. The shortest line up I have seen so far belonged to a gay car: man, man, dog; the longest I am unable to recall: the line going on and on and on off the people mover’s window and along the bumper bar. I have not seen any single person attaching his own figurine to his car; a man lifting weights, which is one of the most popular male images, might make its owner appear like a bit of a loser, if displayed alone. It slightly depressed me, seeing all these squiggles on cars: I thought: “Come on! You are human; you can express yourself creatively without the dumb sticker. You can do better!”; then I started noticing the personalised number plates and came to the conclusion that you can do a lot worse too… 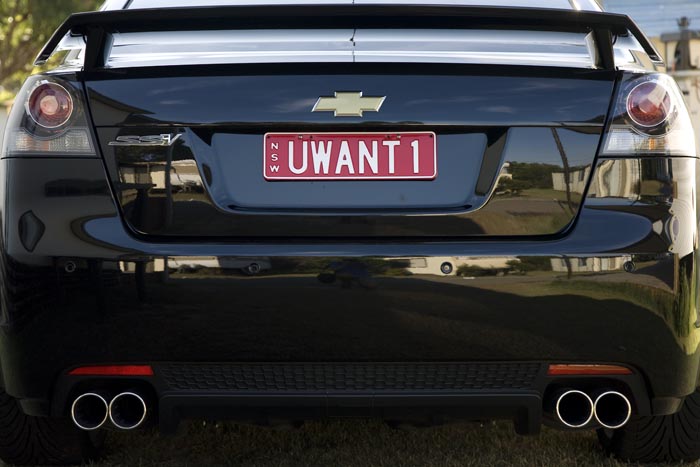 In mid-afternoon we abandoned the Pacific Highway for the coast. We drove through fifteen kilometres of idyllic dairy countryside and lush Australian bush to reach the village of Arakoon: a few houses set deep in the woods and a caravan park. Arakoon is – according to the tourist notes in our cabin – aboriginal for: “echo from a hardwood parrying shield”. Our overnight stop was the Trial Bay Eco Holiday Park, near South West Rocks. We arrived there to find kangaroos grazing on its grounds. Wild dogs have wiped the wallabies out of our little home valley so this is my son’s introduction to the Australian icon. He is suitably impressed. We swam in the pool, jumped on the inflatable pillow, took pictures of the kookaburra heavily hinting for food on our veranda, ate and went to bed. 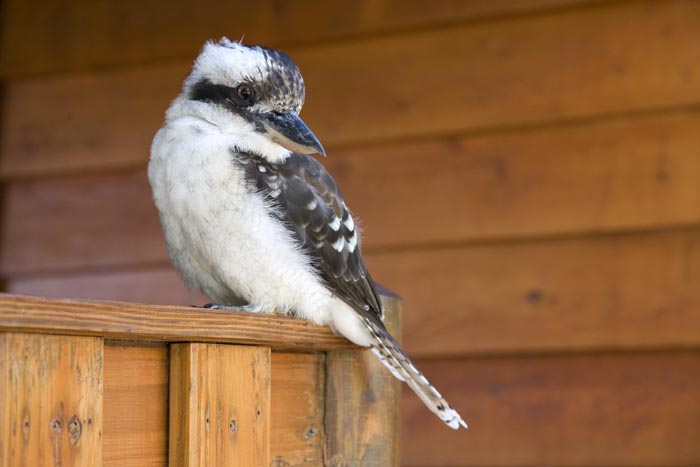 Trial Bay owes its name to the brigantine “Trial”, seized on13th September 1813 – with its crew and passengers – by escaped convicts while at anchor in Sydney’s Watson’s Bay. Commander White, which led the search mission on board of the “Lady Nelson”, found the shipwreck’s remains on the sands of Trial Bay in 1817.  No sign of survivors. On that expedition, he also found (and fixed the latitude of) the entrance of the river first called “Wright”, then “Trial”, then “New” and eventually – as it is known today – the Macleay River. 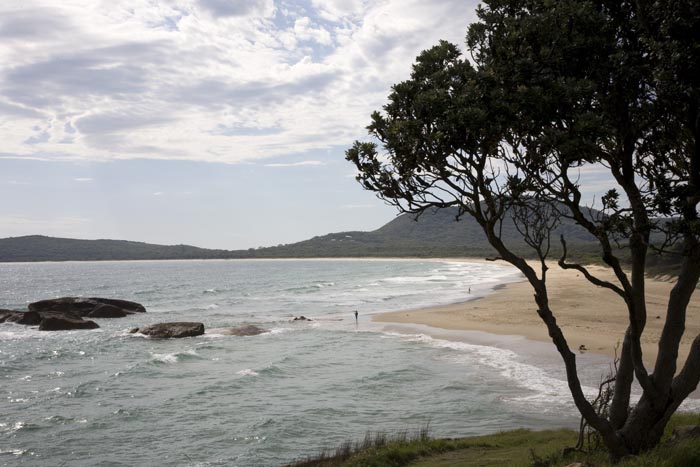 In the morning we dutifully sat behind the wheel and got going again. The road cut a thin ribbon of “civilization” through the Eucalyptus and Banksia scrub. The tall Australian sky arched above us. I never tire of marvelling at the Australian sky and I can never find a decent comparison: the Dutch sky, maybe or the ether above Norfolk’s beaches but neither really is a match.

Our last leg of driving was tiring but thankfully uneventful: we stopped over for lunch at the cool and colourful Greenhouse Cottage in Nabiac, another lucky find: coffee was good and so was the Caesar salad with grilled prawns: fresh and delicious apart from the dressing, which tasted supermarket-bought. Before Raymond Terrace, where we once broke down, we stopped for petrol at a papier-mache’ replica of Uluru. Like the other artificial landmarks we passed on our way: Ballina’s Big Prawn and Coffs Harbour’s Big Banana (70s attempts to put their respective towns on the map luring the passing tourists with a photo opportunity), is looking washed out and a bit desperate. 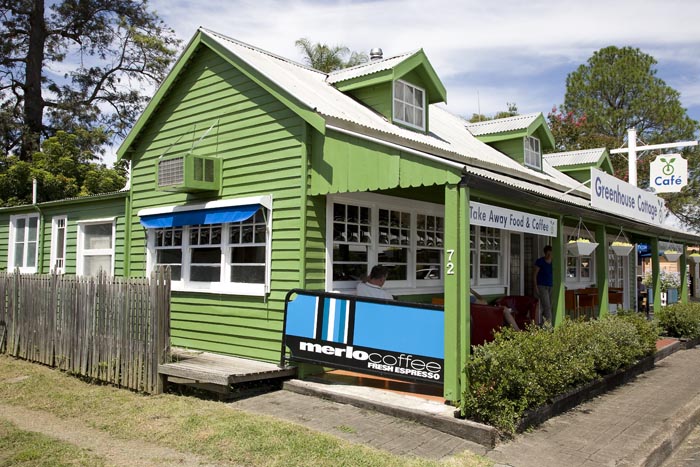 Old friends from that city took us to Newcastle beach for coffee, gelato and a quick swim at the art deco ocean baths then – having travelled for two days and eight-hundred kilometres – we finally arrived at Norah Head Holiday Park: our destination. 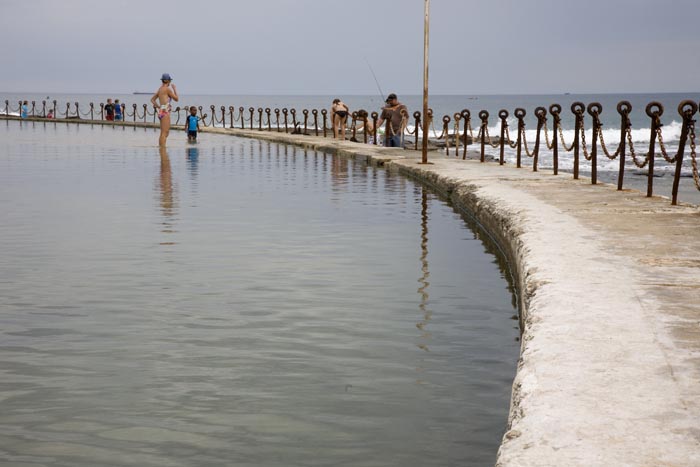 Once a year, thirty Australian families with maybe fifty Taiwanese adopted children aged between one and twenty congregate in this quintessentially Aussie caravan park for the most Australian of ceremonies: The Sausage Sizzle. For a weekend we take the place by storm: Taiwanese kids running, jumping, swimming, cycling everywhere. Once a year, our mixed-race families become the majority: the norm. Well worth the trip. 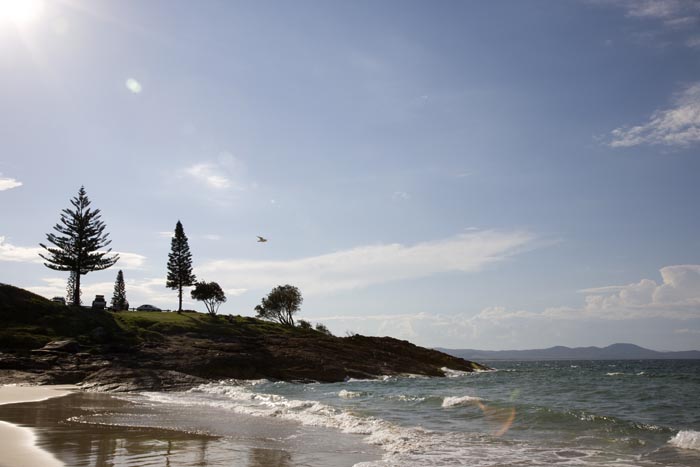 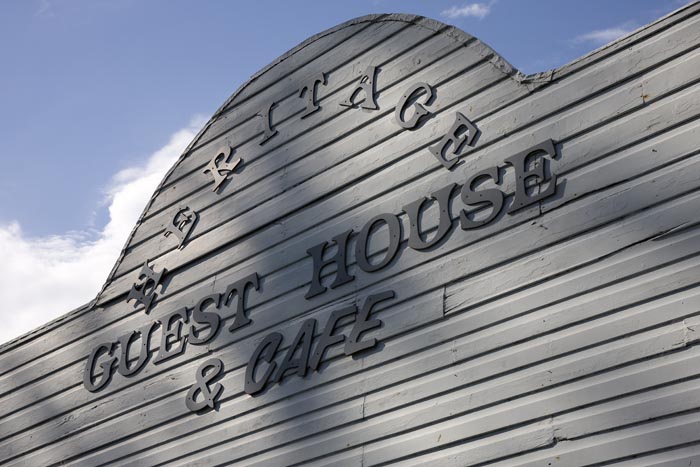 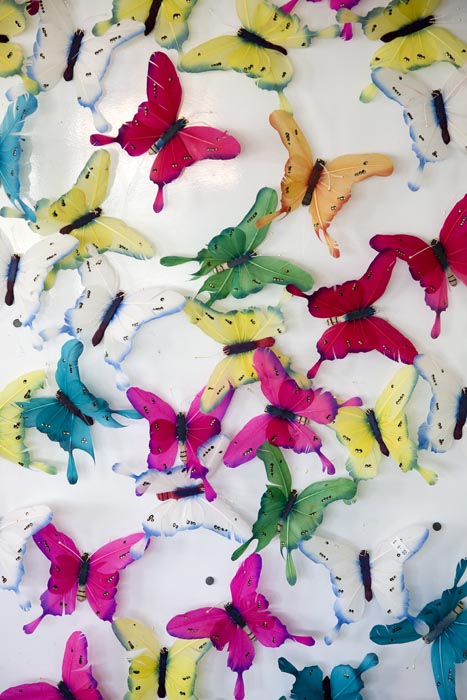 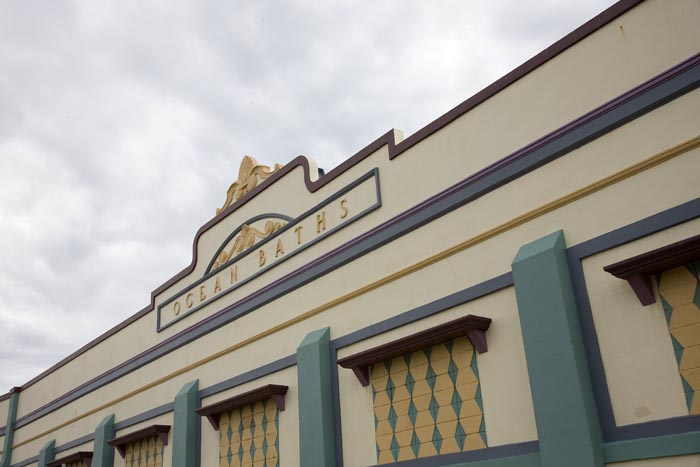 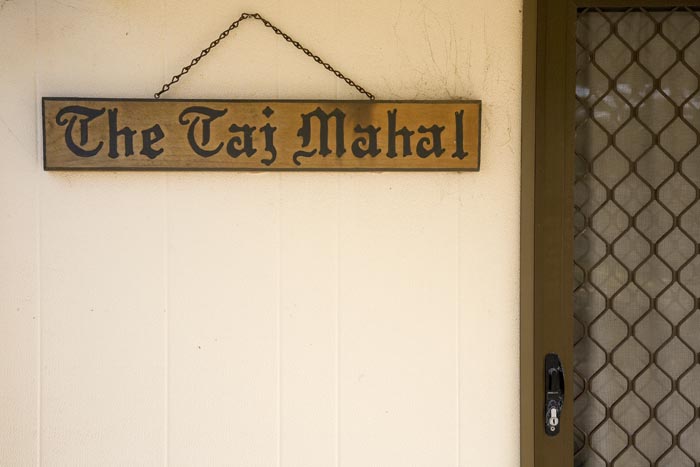 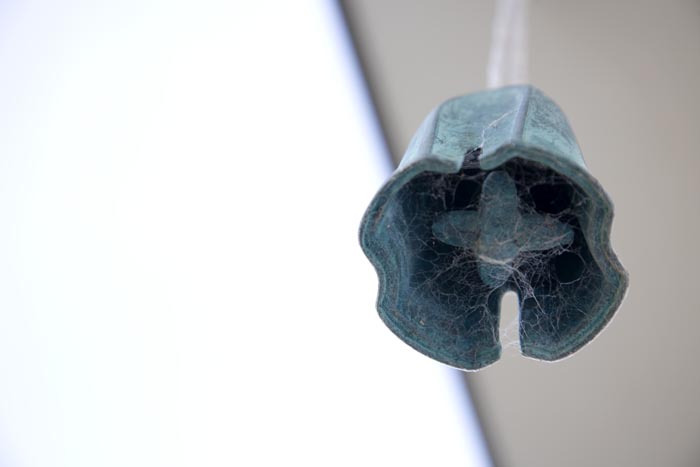 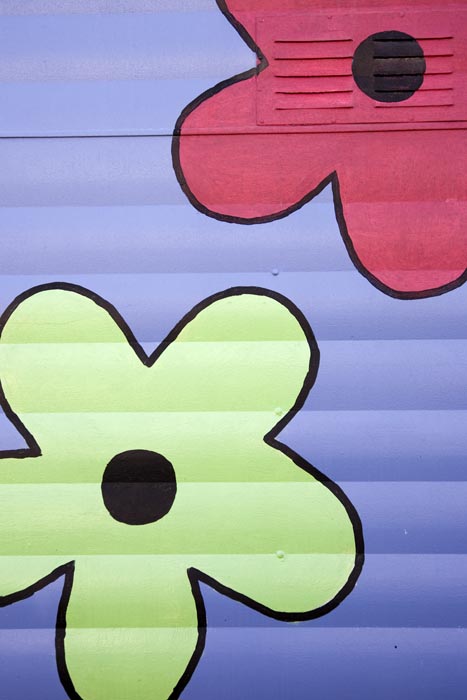